We have a new dog in the family!

I had the privilege of accompanying my cousin to our local animal shelters to find his new best friend. He’s never lived with a dog, his parents didn’t have dogs growing up so he only had my train wrecks to play with. (I didn’t get a dog until I was 19, that would have made him about 8 years old.) 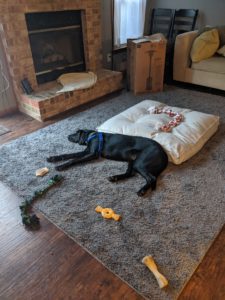 Sleepy pup after a bit of training.

Since I know a bunch of dog people I was able to provide contrast. We were able to see both the world of purebred dogs with introductions to many friends who are breeders and show their dogs in conformation or sports.  I also have friends who work in shelters and with rescue groups so I was also able to show him that side of the dog loving world. We discussed the pros and cons of each path, and what he was comfortable with.

We also discussed in depth, what his goals were and what he envisioned life to be like with a dog. From those discussions he decided that a rescue dog was the way he wanted to go.

There is no right or wrong answer to the question of rescue or purebred. I have 2 rescues and one purebred currently who were acquired them for different reasons, and they serve different purposes. I love them all the same.

Back to our story…

We planned a day to go to the shelters and take a look around. Since I know people, I asked those in the know to recommend a few dogs who might match our criteria. This also helps with the feeling of overwhelm. If you have ever wandered through the kennel area at a shelter, all the dogs essentially look the same. Knowing you can choose from any of them can be a bit daunting! Having a list, from the people who see these dogs everyday was certainly helpful! (Thank you Amanda, and both Jessicas!)

We visited with 8 dogs in two shelters before he made his pick. I let him make the emotional choice, but if I saw any red flags I would point them out. He chose one affectionate walker hound at the first shelter, that was not at all what we had discussed as a goal for a dog. Taffy was sweet, but clearly had been a discarded hunting dog, and with that comes little to no house manners, and she was heartworm positive, which would delay adventure time by about 4 months. Taffy is going to be a great dog for someone who can give her some rules, and be patient while she figures out life inside a house, but it was not the dog that my cousin had described to me prior to our trip. 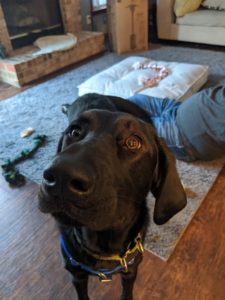 The seventh dog we met with was Harley, a barky, jumpy girl who had been returned for some resource guarding of her food bowl (easily fixed, I saw no problems there)  I noticed some crouching and tail tuck when coming into the playroom. We let her take a good while to sniff around the room. She sniffed the caretaker helping us, she sniffed me and continued around the room until she sniffed my cousin seated on the floor and plopped into his lap.

Harley jumped and barked at us when we walked by her kennel. Actually, all the dogs we saw had terrible kennel behavior. Jumping, barking, growling and retreating. If it had just been me, I might have passed her over. Luckily for Harley, I had a list!

In the meeting room, Harley was not taking food from me and not playing with the toys like the other dogs we had visited, but I saw some resilience in her. She has a natural curiosity about things, she was calmer now that she was outside of her kennel, and was seeking out people for affection. This could be a good match after all.

There is no guarantee that a dogs behavior at the shelter will in anyway be a predictor to how they will act outside of the shelter. The same idea that a well bred puppy will not necessarily act like its parents. The biggest struggle I see with people comes when the dogs temperament is not matched to what they expect it to be. Adopting a dog can be a very emotional decision and having an impartial 3rd party to help you make a clear headed decision might be the difference between the best dog ever, and an emotional train wreck!

So far, a happy ending!

So far Harley, now Ayla, is transitioning easily for my cousin. He’s done all the things I have told him to which has helped her to ease into her new life with less stress.

If bringing home a new dog is in the cards for you this year, reach out to us, or another qualified trainer to help be that impartial 3rd party. Your forethought will make them jump for joy! It will also give you a bit of peace of mind that a person trained and certified in dog behavior is helping you find your new best friend!