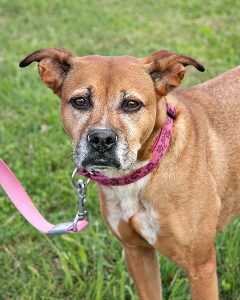 In my last post, I wrote about my hobby: Dog Sports.

In this post, I want to let you in on a bit of my human journey.

When I was in my 20’s I was very active in rescue and dog events. I could be found promoting rescues and the idea that pitbulls in shelters were not inherently evil, and could in fact, make a very nice pet. (I still work with pitbulls in rescue quite a bit, just in a different capacity)

I’ve mentioned her quite a bit in blog posts. Since she had some pretty debilitating separation anxiety, she went everywhere with me. (this was a time before medication, you lucky, lucky people!) This means she spent her weekends at things like Woofstock or Bark in the Park. She was great at showing people that bully breed type dogs were actually nice pets and could live peacefully in normal society. One day in 2012, I was packing the car for a weekend event, and instead of getting in the car, Opal walked down to the neighbors house. We had a heart to heart conversation, and I told her I needed her today, but she didn’t have to go with me anymore, unless she wanted to. She chose home more and more often.

Pixie and I at Dock Dog Nationals in Iowa

A few months later, I brought Pixie home from the shelter. She was a lovely puppy, quiet in her kennel, good with other puppy playmates, still very young. I figured I would foster her for a few months and off she would go to a new home. Well, y’all know, she never left. When she had been with me about a year, I decided she was staying and she would be my sport dog.

About a year later, Pixie became incredibly reactive to other dogs and people while on a walk. In some places, she was great with the chaos, but one on one it was too much for her to handle. At the time, I didn’t realize the two were related, and being a brand new dog trainer, I couldn’t understand why some places were so difficult, and others she looked like she loved.

Pixie is not the dog I envisioned when I brought her home from the shelter six years ago. I’ve mourned the idea of  the dog I thought I was getting. My husband and I have had more conversations about euthanasia and dog management than any normal couple should ever have. (Bless him for taking on my crazy dog with open arms!)

It took me about 3 years to really go through the 7 stages of grief with her. When my baby dog started acting aggressively, I was in denial and kept asking her to do more sports trying to find something we could do safely together. Because everything can be fixed with more training, I tried everything, I am a dog trainer after all! I was angry that I had the dog that I couldn’t leave the house with. The dog I always had to be 100% on top of to make sure she was safe. I wanted to show the world that she was so wonderful, what did I do wrong?! 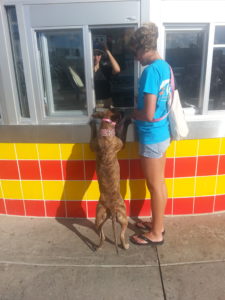 I have finally accepted that she is a dog who stays at home with 100% management. Her fear of the world is too great for her to be safe and comfortable. She was supposed to be my first real dog sport teammate. She gave me the best she could, but the more we tried, the more I could tell she was only there because I asked her to be. Genetics are a crazy thing and sometimes you get the short end of the stick.

To those of you mourning the loss of the dog you envisioned, I see you.

Going through the stages of grief for an idea seems like a crazy thing, but it is real. Loss is real, and you have lost the idea of what your life with this dog should be. It does take some time to accept that things will be different. Different is not necessarily worse, but just different.

I have been there, and I will help you as much as I can to get you close to the goals you have set. The grief is real, and I helps to talk to someone. Send me an email if you need someone to empathize. I will hear you!