I need to share this story with you because it embraces so much of my training philosophy and why I recommend the things that I do. It is a true testament to the power of a committed owner and stress release programs in changing behavior for the better! I am so proud of this team, and how far they have come, that I hope you can take away some pieces that might be beneficial for your own dogs.
Inga had been picked up in January of 2017 as a stray in a very rural area in North Carolina. Those that know anything about rural areas, their animal control has very little funding, and even fewer volunteers to help the animals in the shelters. Being sweet as sugar, she was quickly pulled into rescue and boarded at a local animal hospital where she began the journey to good health, heartworm treatment, and basic vetting.

Over the next few months Inga would be moved from foster home to vet clinic to foster home and eventually back to North Carolina with the rescue coordinator. Over that time she began to show more and more anxious and stress related behaviors, which included pacing in her kennel, hyper attachment to her people, and inability to settle down in normal situations, which caused her to over react in many new situations.

When I met Inga in August, she was on three medications to help get her through daily life. Two sedatives, and one for anxiety. She had difficulty being crated, she could not settle if the other resident dog was around so they kept them separated. She constantly was looking for something to steal, eat or destroy, so she required constant supervision by her foster parents, and this was understandably taking its toll on them.
Summertime on the coast is full of pop up thunderstorms and heat lightning. With all of the stress Inga was under, a pop up thunderstorm was the last thing she could cope with. A week of severe thunderstorms after Fourth of July fireworks was all she could handle. Fosters reported that she could not settle, she was pacing through the house wide eyed and panting, jumping on and off the furniture, if confined to keep her from pacing, sh

e was jumping up and down. She was completely out of her head. Her poor fosters were up all night with her. Medications were changed and a phone call to me was made.

During my evaluation of Inga, I saw a very sweet but very stressed out young dog who truly wanted to do what was asked of her. She was jumpy and mouthy, panting and wide eyed for most of our consultation. She would lay down because it was hot and she was tired, but her brain would not let her relax. She would be up and pacing again in less than a minute. Her foster reported that this was normal, and my heart broke for her. Once I went through her history with the rescue, I could not 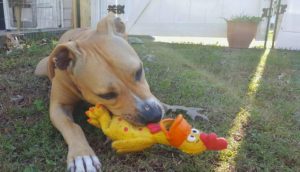 believe the amount of stress this poor dog was carrying with her. If I counted correctly, she has been moved to 7 different places in less than the first year of her life. Dogs thrive wit

h communication, and consistency, and she had absolutely none up to this point. With the constantly changing environments, and no one to teach her how to live life with people, the stress continued to build. I don’t know if a dog can have a panic attack, but I absolutely believe that is what happened to her during that thunderstorm.

We talked at length about enrichment and stress relief in dogs. Inga was being moved again to North Carolina to stay with the rescue coordinator in a week so we agreed that stress release program would begin there.
Once in Carolina, Inga was on a strict schedule of meals, playtime and down time. Every meal was during training, or in a puzzle toy. Training happened twice a day, and included basic manners, leash walking around the back yard, and lots of fetch with rules to keep her arousal level down. We introduced a sandbox, and flirt pole to keep her brain and body active. Toys and chews were rotated on a regular basis to make sure she had variety to keep her from getting in trouble. Enrichment puzzles were very easy at first to allow her to be successful and build up her confidence in problem solving. Walks were removed from her schedule because that was getting her too worked up, sending her into a biting and jumping frenzy once the leash was put on. Since we were trying to keep her stress low, this was not a healthy activity for her at first.
After the first week in North Carolina, she began to relax, and show she was dealing with life much better. We began weaning her off of her crazy medication cocktail with the help of her vet. Week by week we removed more and more of the medication, and saw only improvement to her behavior. The schedule, puzzles, and training all continued as normal.
By the holidays in 2017, Inga was completely medication free. She continued to do beautifully with her training, often attending classes with me and acting like a normal dog at home and walking in the neighborhood. Her training continues to help her cope with the exciting things of the world, like other dogs and people who she adores. Puzzle toys and schedule are still a big part of her life to allow her to deal appropriately with normal life stress. She does normal dog things, and acts like a normal big puppy should. 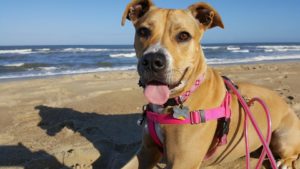 I cannot say how proud I am of team Inga! Many people would have given up on a basket case like her, and moved on to something easier. The dedication to her stress release program is what saved her life, and will allow her to live without medication or the constant worry and panic that she started with.

Communication and Enrichment are the cornerstones to having a well-rounded and happy dog who can cope with anything that life can throw at it. If you are struggling with behavior challenges in your dog, start with enrichment. I have a free e-book download for signing up for my newsletter. You can have more tips and blog posts come straight to your email!